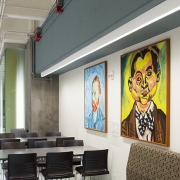 The art community in San José, California is evolved, involved and organized. Public art installations and murals play a significant role in the downtown landscape as almost any area lacking visual interest is seen as a possible canvas. This art community is especially vibrant at San José State University.

In September of 2010, in conjunction with the San José State University Student Union Renovation and Expansion project, construction workers erected an eight-foot-high wall surrounding the Student Union construction site. The internal debate over the splintered eyesore of a barrier began almost immediately and requests from the Art Department to do something with the great plywood wall were made early and often. The school rebutted. The planks were painted. Blue. The students of San José wanted something more – something better than blue.

An extracurricular art club, the “Dirty Brushes” , saw an opportunity to create a public art piece and the blue wall was perfect for a large-scale mural project. The project know as “Better Than Blue” began in April 2011 with a small grant from the Student Union. More than 100 art and art history students would come to be involved in painting more than 45 different “self-portraits” of a diverse selection of famous artists on the blue wall.

When exterior construction completed in 2015, the painted wall was scheduled to be demolished and discarded. Thysse stepped in. We knew the wall needed to be saved. It was artwork that needed to be preserved, it was a story that needed to be told. We hired a crew to carefully dismantle the wall, individually wrap each 8’ tall panel, place them into shipping containers and ship them to a local storage facility.

Almost a year later, as the interior construction on the Student Union was being completed, Thysse began the process of restoring the “Better Than Blue” wall by unpacking and sorting through the salvaged panels. We chose 30 panels that were in the best condition and hired a local artisan craftsman to properly restore, preserve and frame the pieces for display.

omg. These were my fav thing about campus

In August, 2016, a week before fall classes began, Thysse came in and installed the restored panels. When the students returned, the artwork that once adorned the construction fence they passed by everyday, the artwork they assumed had been lost and forgotten about, the artwork that reflected the San José State culture had once again appeared on the site. This time, inside and permanently on display on the walls of their Student Union.

Our monthly newsletter features strategies and tips to ensure your printing integrates with your business goals.

Ensure your next printing project is a smart business decision.

Thysse (tie • see) does more than offer a full range of commercial printing services. We act as a business partner, providing insights to help your print boost your profits.

As a third-generation, printing company in Oregon, WI, we developed this winning combination by providing printing, design, and manufacturing services for decades. We think about how your story is being told through your direct mail, your catalog, your fleet vehicles, your apparel, the sign outside your door, and the design of the lobby inside your door.

Thysse is where you go with your brand.

Who Trusts Thysse With Their Brand? – Oregon Community Bank

Who Trusts Thysse With Their Brand? – WEA Trust
Scroll to top