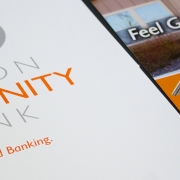 Where do you go? How do you begin?

Oregon Community Bank turned to the branding team at Thysse. We began with a thorough examination of the existing visual brand elements, and OCB’s future plans. We then organized a series of Thysse-led employee charrettes in which we guided internal discussion focused around exposing the existing company culture and visions for the stakeholders’ outward messaging.
Thysse used this information to develop a complete rebranding that better fit an overall “Feel Good Banking” message and community mission. The finished deliverables not only included all visual identity assets (logo, typeface, color palette, print collateral, interior and exterior signage), but established the brand family for future OCB community branches.


“We were not only impressed with the end result, but the process in which Thysse employed during our rebranding process. They made it a truly collaborative effort by coming to us and leading sessions that drew out our thoughts, wants and needs. Thysse then took what we said and made it real. In the end, they effectively encompassed who we are as a bank and who we are as a brand. Simply put – success.”
– Elyse Smithback, Vice President at Oregon Community Bank
https://www.thysse.com/wp-content/uploads/2020/01/header-1.jpg 436 1395 Thysse https://www.thysse.com/wp-content/uploads/2020/01/main-nav-logo.png Thysse2017-10-09 02:01:192020-03-22 23:50:01Who Trusts Thysse With Their Brand? - Oregon Community Bank

Our monthly newsletter features strategies and tips to ensure your printing integrates with your business goals.

Ensure your next printing project is a smart business decision.

Thysse (tie • see) does more than offer a full range of commercial printing services. We act as a business partner, providing insights to help your print boost your profits.

As a third-generation, printing company in Oregon, WI, we developed this winning combination by providing printing, design, and manufacturing services for decades. We think about how your story is being told through your direct mail, your catalog, your fleet vehicles, your apparel, the sign outside your door, and the design of the lobby inside your door.

Thysse is where you go with your brand.